Reforming GST for the future of Australia – how and why 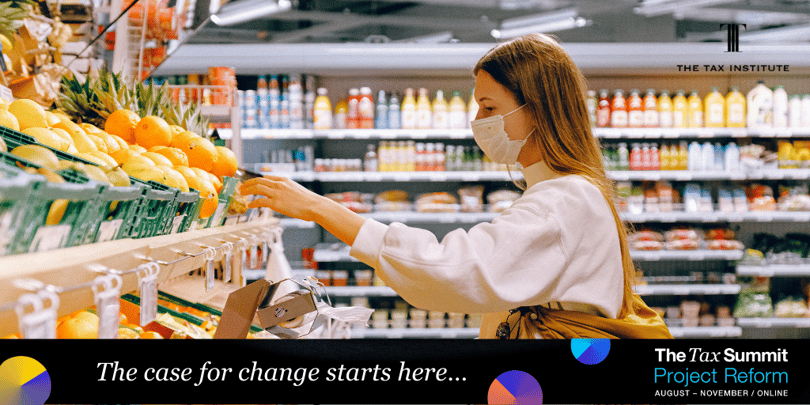 GST. It’s often the first thing to come to mind when we talk about tax reform. During The Tax Summit: Project Reform, we heard numerous opinions on how the GST can factor into the reform agenda. Whether broadening the base, increasing the rate or both, most of the experts involved in our program had an opinion on how GST should be reformed.

Here are some of the key insights drawn out from the session.

Ken kicked the session off on a hopeful note, saying that our current environment was one ripe for tax reform.

“Right now is the best time we’ve had for a long time to embark on real tax reform,” he said. “Why? I think all members of our economy, our society, our government, our representatives in Parliament cannot deny that we are currently at a crossroad.”

Because our current situation is so unprecedented, Ken said, “We can’t reasonably expect the current and existing tax system to deliver what we need, what we expect and what would be good outcomes for the future.”

He said that before talking about how to change the GST, it was vital that we “think deeply about what we want life to be like in two, five, ten or twenty years’ time.”

“Only then can we start working at how we use the GST system to help deliver those outcomes. GST and tax reform should be the tool to get us where we want to go, we shouldn’t embark on them until we know where we are and where we’re going.”

Allison added that, “In a post-covid-19 environment obviously its really important that anything we do in terms of tax reform supports economic growth. That it generates revenue to support ongoing government expenditure and improves inequity, particularly the intergenerational inequity that’s arisen because of COVID-19 where younger Australians are going to end up paying for our lockdown for many years to come.”

“In this landscape, what we’re going to have to do is create a situation where taxpayers are prepped to accept a broader base or an increased rate of GST and not feel like that is going to negatively impact them on an individual basis,” she said.

According to Kevin, GST is “a very efficient revenue raiser. What I mean by that is, it raises revenue without really distorting the economy if it’s done on a broad base.”

One of the challenges with reforming the GST, by increasing the rate or broadening the base Kevin said, is that it is a regressive tax – higher GST hits lowest income earners hardest. This means enough GST revenue would need to be set aside to compensate those low-income families. However, Kevin later explained, this may not be the insurmountable hurdle it first appears.

Perhaps counterintuitively, he said,” it is a fact that taxing food will typically assist those who are less well off.”

“So, it’s a classic Robin Hood strategy – you can actually take from the rich and give to the poor. That’s because the bottom 20% are buying TipTop loafs at $3 and the top 20% are buying artisan sourdough loaves for $6 plus. And so, you collect more GST.

So, it doesn’t make sense to subsidise high income earners buying their sourdough bread – and oysters and caviar, which are all GST free. You’re much better off taxing things like food and redistributing the money to people who are less well off. You can overcompensate them and still have money left over.” Touching on a topic covered on numerous occasions during the Virtual Summit, Allison pointed out that the political landscape, political will and perception of the public are important factors when trying to enact GST reform.

“Is a Federal Government going to push forward with GST reform? It’s always been seen as the political hot potato that nobody wants to touch. If it’s done in the right way then that can be overcome, but we would need to convince the federal government that this is a good thing, for the benefit of the entire country.”

Ken agreed that politics played a significant role in reform the GST, saying “I think our political system is our greatest barrier and at the same time greatest opportunity to actually create a hopeful tax system.”

“My view is that we should unburden government, unburden the political system and unburden the people. And instead of asking them what they want – because there’s thousands of ideas as to how we should change the GST, and they all have merit – my view is that to overcome that barrier we should establish a non-partisan, independent tax reform commission,” he said.

Tell us what you think in the comments below: how should the GST be reformed? What outcomes should we be seeking by doing so?

Want the full insights from The Tax Summit: Project Reform? Keep an eye out for On Demand recording bundles coming soon!