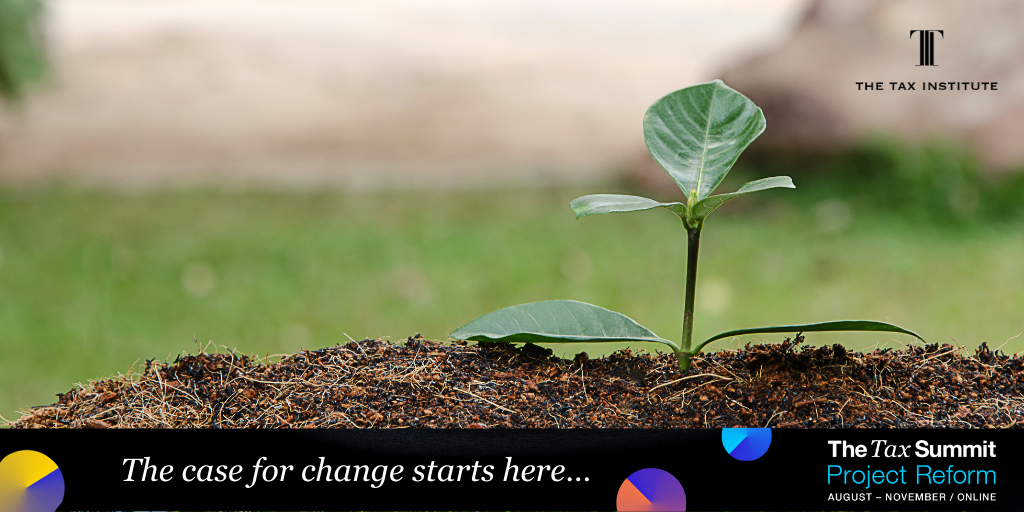 The line-up of expert keynote speakers for The Tax Summit: Project Reform, recently kicked off with a session from Chris Richardson, Director of Deloitte Access Economics and one of Australia’s best known economists.

We’ve put together a snapshot of just a few key insights captured in his session.

Commenting on the recently announced 2020–21 Federal Budget, Richardson said that contrary to some views, the Stage 2 personal tax cuts announced in last week’s Federal Budget made sense, and cautioned against analysis focusing purely on the dollar amounts.

“The economics and the politics of the tax debate often pull against each other,” he commented.

Richardson was also positive about the loss carry-back and full expensing measures announced in the Budget, but didn’t necessarily agree with Treasury’s claims concerning how much help they would be.

He said the fact remained that these measures are temporary, a stance echoed by The Tax Institute’s commentary on the Budget.

It has also been flagged that the Government might move to an increased business allowance.

We’re sharing a selection of the highlights from this Keynote session here. To watch the full webinar and delve into the insights offered by Chris Richardson, register for a Full Access Virtual Pass to The Tax Summit: Project Reform. Your pass includes access to all future sessions and the recordings of past sessions.

How tax reform can improve prosperity

Richardson said that broadly speaking, the two economic levers of spending and taxes can be used to achieve two key Budget targets of fairness and prosperity. Fairness, he said, is driven largely by spending, but “to improve prosperity, you want a tax that doesn’t do damage to prosperity.” Richardson pointed out that while personal taxes tend to hit high-wealth households, spending taxes like the GST have more of an impact of lower income families.

“Both of those things are fine. And if you want to make a change to the GST, for example, if there’s a case for that, then you need to understand it’s going to worsen some fairness, so you might need to do some spending [to compensate lower income families],” he explained.

GST is one tax that comes up in any discussions around tax reform, with many practitioners in agreement that broadening the base and raising the rate of GST would have a positive impact on our economy and our tax system, freeing up funds for reform in other areas.

Identifying which taxes improve prosperity and which are a hindrance is key to meaningful tax reform.

“Not every dollar of tax has the same impact on the economy,” Richardson said.

“Some types of taxes absolutely crush prosperity. For every dollar they raise they can shrink the economy by 70, 80 cents in that dollar.”

According to Richardson, tax reform is about shifting the tax burden towards taxes that don’t hurt the economy, such as municipal rates and land tax, rather than those that do, for example, stamp duty and company income tax.

He noted that many of the taxes best suited for reform are actually state-based, saying, “You want the best tax reforms in Australia? They’re not federal.”

Head to our member forum, Community, to continue the discussion and tell us what you think about the ideas raised in Chris Richardson’s Keynote session.