As we wind up Day 2 of The Tax Summit: Project Reform Virtual Summit, there are a host of new insights, opinions and ideas to engage with, from experts working across the tax landscape.

The Virtual Summit is the place where the entire program of 6 Keynote sessions, 4 Roundtable forums, 8 Focus sessions and a range of draft papers and volunteer contributions come together to form the basis of our Case for Change.

With the help of our members, delegates and nearly 50 expert presenters, we are aiming to define the priorities for reform as seen by those who know our tax system best. Here are some of the key insights from the second and final day of the Virtual Summit.

In a panel delving into the opportunities that regulators have and will pursue to make Australia’s tax administration world leading, Jeremy Hirschhorn, CTA, Second Commissioner of the ATO, Teresa Dyson, former Chair of the Board of Taxation and Paul Tilley, former Senior Treasury Official, outlined the approach of these different organisations and what they are doing to help make interaction with the system painless, quick, and cheap.

Jeremy spoke about how, while we are advocating for transparency in the tax system, there may also be an element of ATO transparency that would assist in creating community confidence.

He said JobKeeper was a good example of up-to-date data enabling better responses form the system.

“The real success from the ATOs perspective is that working collaboratively with Treasury and helping shape those measures around the data sources, meant that we could actually have a program which was implementable at that sort of scale.”

The interplay of state and federal indirect taxes

Following the announcement in the NSW Budget of an ‘opt in’ model to shift from stamp duty to an annual land tax, the experts in session 7.2 took on the topic to delve deeper into the pros and cons of this approach, how it will work and who is likely to stick with stamp duty.

Nathan Deveson, CTA, MinterEllison, said, “Those who intend to own property for the medium-to-long term are the ones who will choose to stay with stamp duty and those banking on having growing salaries and incomes over time may choose to go the Afterpay model of the property tax.”

Geoff Mann also discussed the removal of inefficient and complex State and Federal taxes in return for an expansion of the base of the most efficient taxes. He spoke about what he called “nuisance nominal duties” and inefficient taxes including FBT, WET and Luxury car tax.

“We just need to really start from scratch. What are we trying to achieve with each of these taxes? Are we achieving it efficiently? Are we hitting the right policy levers?”

However, without political will, he said, we’re largely “urinating in the wind.”

In session 8.2, presenters Ken Fehily, CTA, Fehily Advisory, Alison Marshall, CTA, PwC and Kevin O'Rourke, O'Rourke Consulting discussed how, despite being an efficient tax – on average costing the ATO just $1.36 to collect $100 of revenue – and general consensus across that tax system that a broader base or higher rate of GST must be part of a tax reform package, it can also be a regressive tax, with unfair impacts for lower income households.

The experts agree that the GST base is too narrow, given the exclusions for health, fresh food and education and the GST rate is too low. However, each option for reform needs to balance the advantage of repairing budget deficit with the disproportionate impact on low-income households by considering suitable compensation for those negatively affected.

Running the Gauntlet… How to effect change? 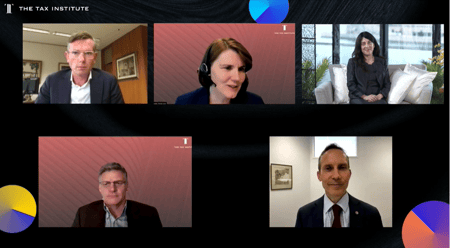 In our penultimate session of the Virtual Summit, delegates heard from some heavy hitters with long records of involvement in tax reform. Shadow Assistant Minister for Treasury and Charities, the Hon. Dr Andrew Leigh MP, was a member of the opposition party that proposed significant tax reform during the 2019 Federal election, and spoke about how that may have laid some of the groundwork for the current tax reform project.

Former Leader of the National Party New Zealand, Rt Hon Sir Bill English, was responsible for New Zealand’s biggest tax reform since 1987, when amongst other things the New Zealand GST rate was raised from 12.5% to 15% and individual and company tax rates were dropped in 2010, shared his insights into enacting successful reform.

Viva Hammer, Brandeis University, was at the Joint Committee on Taxation during the significant US tax reform of 2017 with the Tax Cuts and Jobs Act – the first significant US tax reform for 30 years and NSW Treasurer, the Hon. Dominic Perrottet MP, who recently announced plans for significant reform to both payroll taxes and stamp duty in his NSW Budget, rounded out the stellar line-up discussing how to enact change and make it stick.

What’s next on the path to tax reform?

The event may be over, but The Tax Institute’s work on facilitating meaningful tax reform is far from over. The insights gathered throughout The Tax Summit: Project Reform, will form the basis of our Case for Change, a paper defining the priorities and possibilities for reforming our tax system.

Our team will continue working on this paper and advocating for meaningful change that matters for tax professionals. Stay connected with the Institute to be in the loop on upcoming reform activity.

If you have a question about one of the ideas brought up in a session or an idea of your own, we’d love to hear them. Head over to our member forum, Community, to add to the tax reform conversation.