We've come to the end of Day 1 and what an incredible way to kick start The Tax Summit. We packed the day full of engaging and informative sessions, including 2 keynotes, 1 interactive Q&A panel and 15 break-out sessions, so there is no doubt that attendees will have taken away some transformative key learnings to put into practice. 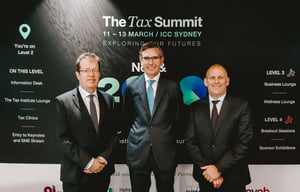 Structural tax reform is something The Tax Institute itself has long advocated for.

In response, Tax Institute President Peter Godber CTA said “Tax reform is vital. The system needs to be simplified to ensure that it is workable into the future. The Tax Institute will continue to advocate for the simplification of the tax system”. Our media release is available here.

Tax Institute CEO Giles Hurst encouraged all delegates at the Tax Summit to celebrate the diversity of the tax profession through connection.

This year’s presenter, the Hon. Justice Simon Steward, delivered a keynote speech addressing the judicial work of the Hon. Justice Richard Edmonds and his vital contribution to the jurisprudence concerning the anti-avoidance provisions in the Tax Acts.

This keynote speech is part of the Justice Hill Memorial Lectures which have now been delivered for 14 consecutive years. First presented in 2007 at the Institute's National Convention, these lectures pay tribute to the late Justice Graham Hill, one of the greatest contributors to the law of taxation. Rightly so, it is a time-honoured tradition that has continued through the inaugural Tax Summit. 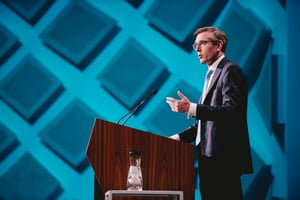 Today was the only day for delegates to attend the Professional Practice stream, facilitated by National Councillor Paul Banister CTA. This is a timely stream given the much-anticipated revised profit allocation guidelines soon to be released in draft for ATO consultation.

What came out of this stream today was that while “pursuit of a simple life” by following the ATO’s guidelines can be useful for some, it’s not the only approach.

The future needs to involve abandoning the notion that professional practices are taxed differently than other businesses - they are dealing with the same issues as all businesses.

The Emerging Leaders Stream was specifically designed for tax professionals with less than 5 years’ experience. A paramount topic for professionals early in their career is how to build trust with clients, and Eddy Moussa, CTA, PwC; Loreena Gillon, CTA, Arithmos Chartered Accountants; and Andrew O’Bryan, CTA, Hall & Wilcox, divulged key ingredients on how to build a personal brand to become a ‘Trusted Adviser’ to clients.

The opportunity was also taken to cover two technical topics young practitioners are likely to come across many times in their career. These were the imputation system which is a relatively unique feature of the Australian Tax system, and foreign income tax offsets, a feature of the international landscape that businesses operate in these days.

A brand new event calls for brand new sessions, including our own version of the ABC’s Q&A show with none other than renowned current affairs journalist and former Q&A host Tony Jones. It'll be no surprise that the focus of this session was tax and the topic for discussion - ‘What does tax reform look like with 2020 vision?’. 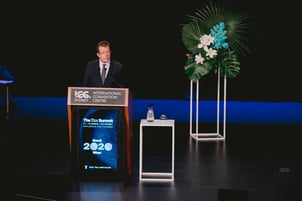 The panel discussed a range of topics including the stimulus package the Government might announce tomorrow querying whether tax is really the answer to everything and noted that the Henry Review, now a decade old, marked the first of the ‘modern’ tax reform processes.

The Institute’s submissions to Treasury and the ATO on guidance issues were also a topic of discussion.

The panel couldn’t identify a country that was a ‘model’ for tax reform. Where does this leave tax reform in Australia.

We are looking forward to Day 2. Highlights are the Commissioner’s address which will be livestreamed for all our members from 9:00am at this link. We will also be awarding the Tax Adviser of the Year awards at our Gala Dinner in the evening.