The next frontier for SMEs – seasoned accounting leader reveals all

A former Principal at Mudgee Tax & Accounting, Denis is also a Fellow of The Tax Institute and CAANZ, and has served in different roles on a number of boards. These include the appointment of Director of the Finance and Governance Committee for the Central North Livestock Health and Pest Authority, being a member of the Audit and Risk Committee for the Maritime Mining and Power Credit Union, and prior to that acting as Chair of the Reliance Credit Union, and Verto (formerly Central West Community College). Denis was also councillor at the Mudgee Shire Council for 9 years, with 5 of those years as Mayor.

To provide some context to the changes across the SME sector, Denis says it’s important to consider today’s significant economic shifts.

“Many economists predict that the next frontier for ‘Developed’ economies is through innovation in new technologies and ideas,” Denis says. “Some of the biggest and strongest economies have historically been built on large-scale production taking advantage of ‘Economies of Scale’, be it manufacturing, mining and so forth. This low value-add per unit is profitable when you mass produce. However this model is not compatible with a highly educated population, demanding high wages, who could be easily replaced by automation.”

To progress, Denis believes the Australian Government needs to create a business environment where SMEs that use intellectual capital to make a small volume of high-quality services and high value-add products thrive.

A snapshot of the recent changes

“I’m sure all SMEs appreciate this,” Denis says. “For our economy to make the gains predicated from supporting SMEs, savings must be reinvested back into the business either in R&D and capital improvements or towards staff training, salaries and incentives.”

However, Denis believes the early statistics show much of the savings go straight to the owners, which creates a greater incentive for those who innovate, or those who invest in innovators.

“But some of the increased after-tax profits must be reinvested back into the business,” he stresses.

The tax definition of SMEs

This definition has been broadened to include a lot more SMEs, as well as bigger, businesses. According to Denis, this doubles down the effect of the tax drop to 27.5%.

“Up to 2016, if a business has less than $2m turnover it classified you as a small business for concessions” he explains. “From the 1st of July 2016 onwards, The Government and ATO defined a Base Rate Entity eligibility for the reduced tax rate as one that “has an aggregated turnover less than $10m.”

Simpler BAS statement to reduce the regulatory load on SMEs

According to Denis, for Tax Agents and the medium-sized entities with in-house specialist accounting staff, this is a minimal gain. However, for a small business, such as a tech start-up that doesn’t use a tax agent for quarterly BAS statements yet, any reduction of red tape is welcome.

“It will help them get on with their day-to-day and hopefully invest that time in innovation and R&D activities,” he adds.

Education: Give your clients the best tax advice by becoming a Chartered Tax Adviser. Save $100 by enroling before 14 February. 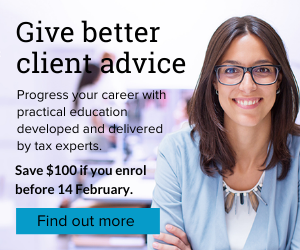 R&D incentives for innovators who spend

While Denis welcomes the R&D incentives for innovators who spend on R&D activities, he sees the definition of true R&D activity as very strict. Meanwhile Denis believes the ATO has ‘cruelly clawed back’ R&D offsets (credits) from the past, a retrospective action he sees as unwarranted.

“It is also difficult to quantify and report the exact expenditure if you’re not an accountant,” he adds. “This could possibly be costly for small businesses who may need to employ someone to do this. And the gain isn’t as large as you may think, as the expenditure required to warrant this rebate is ‘added-back’ to the taxable income of the entity. It’s still a net gain, but it’s reduced.”

What’s Next - Who knows?

Simplified Depreciation ends on the last day of June 2020, and businesses can’t get away with not paying PAYG withholding and Super anymore, with the STP changes high on the agenda.

“STP has given the ATO a very large window into SMEs which is a good thing,” Denis explains. “Surprisingly the cash economy is alive and well and the ATO is not out on the ground comparing taxpayer’s lifestyles with their declared income.”

“However we continue to see underpayment of wages by large companies and prominent individuals earning too many millions of dollars,” he adds. “It’s not all administrative errors. These parties are ripping off those on the lowest rung of the fortune’s ladder and that type of culture comes from the top”.

Denis agrees The Tax Summit’s educational sessions and workshops which cover SMEs, emerging leaders and the digitisation of the economy/tax will focus on some fantastic and relevant themes.

“I also wish to thank The Tax Institute’s CEO, Giles Hurst and all at The Tax Institute community for this opportunity to discuss these timely issues as The Tax Summit nears,” he concludes.

Attend The Tax Summit and discover over 60 sessions delivered by local and global tax experts, across SME, Corporate and Hot Topic streams.

With over 1,000 attendees against the stunning harbourside backdrop of the ICC in Sydney, The Tax Summit is the unmissable opportunity to network, refine your skills and take your career to the next level.

Don’t miss out. Register for The Tax Summit 2020 today.