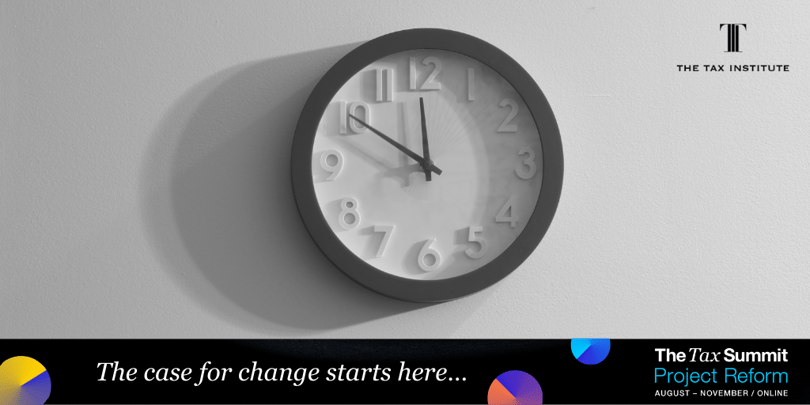 “Tax reform is not any old change that you come up with and it’s not tax cutting, either. There are people who like to say that tax reform means less tax, but that’s ideology, that’s not tax reform.”

When we said we were putting all views and ideas on the table when it came to tax reform, we truly meant all views.

In the penultimate Keynote session of The Tax Summit: Project Reform, we heard from Former Head of the Treasury Budget and Revenue Group, Greg Smith on why now is not the right time to be embarking on tax reform.

Greg was a member of the Future Tax System Review in 2008-09 (known as the Henry Review) and discussion of this review and discussion of its usefulness – or lack thereof – to today’s tax reform agenda featured heavily in his presentation.

Need to catch up on the path to tax reform so far?

Register for a Full Access Virtual Pass to The Tax Summit: Project Reform, to watch all past sessions from the event lineup.

Your Virtual Pass also allows you to tune into the Virtual Summit event on 24–25 November, streamed live from the MCA, Sydney.

Not time for tax reform… yet

Taking a different stance to most of our Keynote speakers and Focus session presenters so far, Greg outlined four key reasons for why this is not the moment for tax reform, concerning the history of reform in Australia, the current recession environment, the “extreme radical uncertainty” the world is facing and the fact that the Henry review can no longer be considered a suitable basis for meaningful reform.

“I don’t think it’s the right time to be putting together a tax reform review committee, but I do think that there is scope for investment in this,” he said.

“The way that good decisions are made ultimately, is always on a foundation of strong investment in understanding the situation we’re in and understanding the technologies that are available to us and how they might be changing.”

Although he wouldn’t necessarily embark on this tax reform review committee exercise now, Greg said “…what I would do is invest in our knowledge and understanding of the way taxes could changes and evolve.”

Ultimately, Greg said that although the timing is not right, there will likely be a need for some flavour of tax reform in Australia’s future.

“I actually think there will be a need for another tax reform, it’s just that it’s not going to look like the one that unfortunately, is being called by 99% of the people calling for tax reform at the moment. It’s going to be a very different type of tax reform. And I think it will be a public policy reform rather than just a tax reform.” What tax reform may look like when it comes

“Tax reform is not any old change that you come up with and it’s not tax cutting, either. There are people who like to say that tax reform means less tax, but that’s ideology, that’s not tax reform,” Greg said.

Tax reform, he said, should be looked at on two broad levels: the architecture of our tax system and the technology that enables us to achieve results through it.

“Politicians are very interested in the architecture,” he said. “They are notoriously poor at dealing with the technology.”

When tax reform comes, Greg hopes it will look at the technology of our tax system, and questions of how to execute a simple, pragmatic system, particularly in a digital world.

Tax reform, he said, would also need to “… look at the big three issues: the intergenerational market, the environmental problem, and the economic consequences of deepening inequality. Those are the big three that any reform has to look at.”

Head to our member forum, Community, to continue the conversation on Greg Smith’s expert insights into the state of our tax system today.