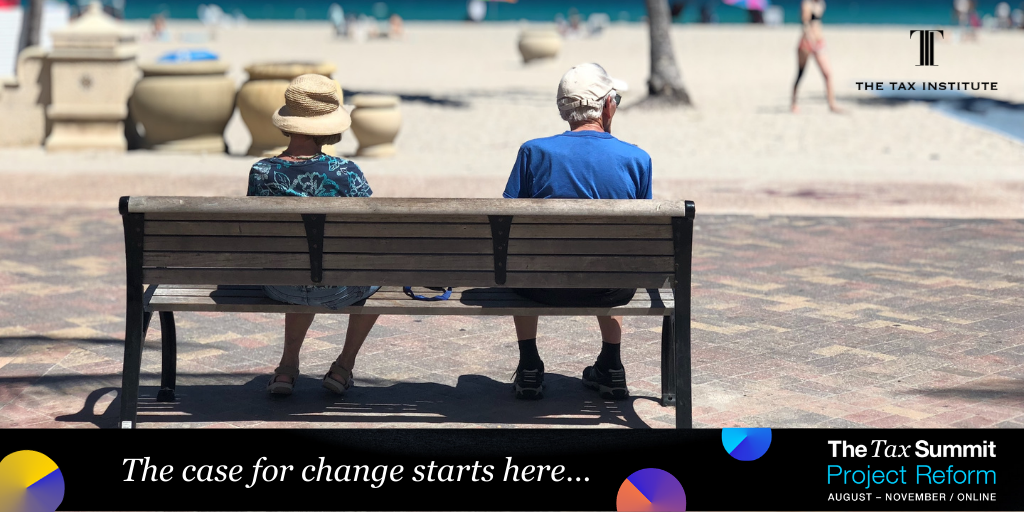 We recently kicked off The Tax Summit: Project Reform, with the first Focus Session in our all-star lineup, featuring speakers Phil Broderick, CTA, Sladen Legal and Ian Raspin, CTA, BNR Partners, in a discussion about the key issues and possibilities for reform in retirement income and wealth, facilitated by our own Senior Advocate, Robyn Jacobson, CTA.

Phil, Ian and Robyn considered whether the current settings are appropriate and explored a number of issues which create complexity within the current superannuation and private wealth systems, including:

We’re sharing a selection of the highlights from the session here. To watch the full webinar and engage with the reform ideas Phil, Ian and Robyn raised, register for a Full Access Virtual Pass to The Tax Summit: Project Reform. Your pass includes access to all future sessions and the recordings of past sessions.

A return to an Exempt–Exempt–Taxable model for superannuation

Phil suggested that much of the complexity in the superannuation system comes from trying to create progressivity in a system that does not inherently provide it. Instead, he suggested the past Exempt–Exempt–Taxable model would arguably be a simpler and fairer system.

The idea of this system is that superannuation funds are not taxed at the contribution or earning stage, but when the retirement benefits exit superannuation. This helps grow superannuation balances, due to the heavy concessional tax rates on contributions, and then when you reclaim these “deferred earnings” you are taxed at your marginal rate.

“You can see why from an economic or tax policy point of view, the E-E-T model makes a lot of sense,” Phil said.

“Plus taxing benefits at marginal tax rates, maybe with a concessional 15% rebate, or something along those lines, again has that progressive scale that we’re used to in other areas, like income tax. So, from those economic and policy models it makes sense. It’s efficient and it’s equitable.”

In the current system, Phil said, we moved to contributions being taxed – albeit at concessional rates.

“It’s actually the opposite of progressive – it’s regressive,” he said.

Phil and Ian were in agreement that this shift back to an E-E-T system would create a considerable impact if it were to be adopted as a tax reform measure.

“I think there’s a lot to be said for [moving to the E-E-T model], provided there’s an appropriate transition period for those who move from the current regime into it,” Phil said.

“It alleviates a lot of the issues and a lot of the complexity in the super system could be abolished, because it would be a fairer, equitable, more progressive and simpler model.” Superannuation Guarantee penalties “out of whack”

One point raised in the session which has been on many tax practitioners’ radars recently, was the superannuation guarantee (SG) rules. Phil explained that the SG system, put in place in 1992, is an old system, and there have been few changes made between its start and now, despite the evolving nature of our world and our work.

“It’s a good time to look at the SG system and see if it is still fit for purpose. Putting aside the philosophical things about whether there should be a super guarantee or not, I think the actual regime could do with a good review,” Phil said.

SG penalties are one major sticking point. These ‘draconian’ penalties could in fact be causing more problems than they are solving. Phil said that SG penalties, “are certainly out of whack.”

While he acknowledged the problem of wage theft and the need to “throw the book at” those employers not paying super at all, Phil explained the need for a penalty system that distinguished between this behaviour and honest mistakes. He said many of the superannuation penalties he sees come from genuine mistakes, often employers who pay a day or two late.

“And they get the same penalties as people who don’t pay at all, so there definitely needs to be, in my opinion, a change to the penalty side of things. Something that deals a little bit better with late payments. Maybe they still get deductibility but have to pay the SG charge, maybe they don’t get the nominal interest for the full quarter, maybe just for the late period.”

CGT discount not made for our current environment

Setting the scene for a discussion about the CGT discount, Robyn explained that it was introduced to replace the indexation method and intended to simplify what was considered to be a very complex indexation rule.

However, she said, “at roughly the time they moved from the old indexation method to a much simpler discount method, we’ve moved into a low inflation environment.”

“… have we landed in a discount regime that is actually too generous for the low inflation environment we’ve got?” Robyn queried.

Ian pointed out that given the current levels of COVID-19 debt, future inflation would be in the government’s interest, so it will be, “interesting to see how that really plays out.”

He said that removing the CGT discount for non-residents was successful, and “to remove it here in Australia, some would argue that it brings equality about.”

“If you put money in the bank as opposed to buying shares why should you pay less money on the share growth as you should the money in the bank, which is just really interest. I think it takes that argument off the table.”

“I like the idea of stepping it, particularly for passive assets,” he said.

“Even abolishing that entire system and adopting the US model where we just apply a uniform tax at a lower rate than the actual gain.”

Head to our member forum, Community, to continue the discussion around Phil and Ian’s insights and the topics of superannuation, wealth transfer.