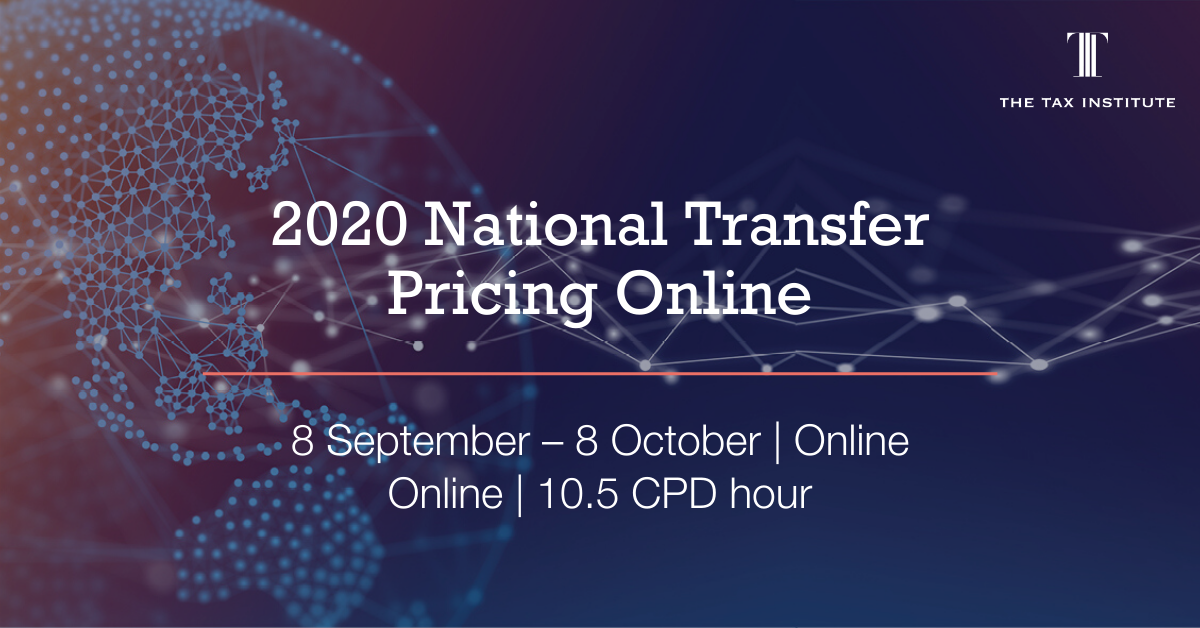 “I started in tax 35 years ago at the ATO in Perth where I cut my tax teeth in the assessing, advisings and appeals groups before moving to Canberra in early 1993 where I encountered transfer pricing. I have specialised in transfer pricing ever since.”

“One of the highlights of my involvement with The Tax Institute was appearing as a witness before the Senate Economics Legislative Committee in 2012 and 2013 in hearings on Australia’s new transfer pricing rules on behalf of The Tax Institute,” Damian said.

“Amongst other things, and along with other private sector witnesses who had also spent time at the ATO, this included being accused by Senator Doug Cameron of being a ‘game keeper turned poacher’. No harm done!”

This September, Damian is combining his passion for transfer pricing and his long experience as a tax thought leader, To Chair our upcoming 2020 National Transfer Pricing Online series. We caught up with Damian ahead of the event to talk about what he thinks practitioners will gain from the sessions and his work in the transfer pricing space.

“Whether you work for an SGE or an SME, are a tax accountant or a tax lawyer or work at the ATO, The Tax Institute’s National Transfer Pricing series provides technical content, practical insights and the ATO perspective on all things transfer pricing with top quality written papers and presentations that only The Tax Institute provides,” he said.

Tax Challenges of Digitalisation or BEPS 2.0

Damian will be part of a panel discussing the OECD’s current key focus area on the tax challenges posed by an increasingly digital global economy, in Part 7: Tax Challenges of Digitalisation of the National Transfer Pricing Online series.

“The increasing digitalisation of many businesses and more particularly digitalised businesses themselves is challenging the historic balance between source country and residence country taxing rights,” he said.

And while this is a topical event for tax practitioners in many different parts of the profession, it’s a topic that has been on Damian’s radar for a long time.

“My interest in this area started over 20 years ago when I was an Australian delegate to the OECD’s Working Party No.6 and to its Sub-group on Electronic Commerce,” he said.

At that time, he explains, preliminary work suggested that the existing guidance on the application of the arm’s length principle in the OECD’s 1995 Transfer Pricing Guidelines would likely be capable of dealing with the transfer pricing issues raised by e-commerce.

“How things have changed in 20 years!” Damian said.

“But what really has changed is that a number of countries are now asserting or wanting to assert a new taxing right that would allow them to tax some part of the profits of an MNE groups from sales in their (market) jurisdiction without the need for any physical presence by the MNE group in that market (as required under current international tax rules). Such an approach, if adopted, would go beyond the arm’s length principle.”

So what parts of the National Transfer Pricing Online series are particularly appealing to Damian, with all his expertise and interest in the space?

“A number of sessions jump out at me,” he said. One is the valuation of intangibles in Part 2: Transfer pricing aspects of cross-border transfers of intangibles, presented by Chris Ferguson from the ATO, Tim Heberden from Deloitte and Jacques Van Rhyn ATI, from Deloitte.

Part 4: Litigation: Glencore case and ATO's appeal, presented by Jonathan Woodger ATI, from PwC, is also a standout for Damian, given the Commissioner’s Full Federal Court appeal is due to be heard quite soon.

“But front and centre this year has to be the impact of COVID-19 on transfer pricing arrangements. The organising committee felt this topic to be so important that two sessions have been included,” he said.

The first of those sessions is Part 1: The economic and transfer pricing impacts of COVID-19 on corporate Australia, featuring a panel of experts consisting of Jo Masters from Ernst & Young, Patrick O'Sullivan from MNF Group Limited, Lorena Sosa Carrillo from Grant Thornton and Pete Rhodes ATI, from Aristocrat Leisure Limited.

That is followed by Part 5: What is the ATO thinking about/doing re: transfer pricing and COVID-19, presented by Sophie Lewis from the ATO, Stean Hainsworth ATI from Duff & Phelps Australia and Zara Ritchie CTA, from BDO.

Find out more and register for the full series or individual sessions here.

After starting his tax career with the ATO, in 2003 Damian joined KPMG’s transfer pricing group as a Director, where he advised multinational clients on transfer pricing and profit attribution issues.  In 2015, he started Damian Preshaw Consulting Pty Ltd, specialising in transfer pricing services for law and accounting firms, where he serves as Director.

When he isn’t leading the charge in the transfer pricing space, Damian is a fan of velodrome sprint cycling.

“I like the speed and the tactics of the one-on-one racing over 3 laps (750m). Only wish I had been introduced to the sport years ago,” he said.

“I also enjoy trying to beat my two adult sons at any computer or card game – it will never happen. They know it, I know it, but they still let me play against them. That’s what families are all about.”