Dealing with GST and insolvency issues

Given everything that’s happened in our economy over the past year and a half, issues of insolvency are an unfortunately hot topic for some tax and legal practitioners.

We caught up with Christopher Lee, Acting Principal Lawyer in the Review and Dispute Resolution (RDR) business line at the ATO and Amrit MacIntyre, CTA, partner at Baker McKenzie, to talk about their session at the upcoming 2021 National GST Conference.

This session, Insolvency & GST, scheduled for Day 2 of the expert program, delves into all things insolvency, including:

Here are the insider insights Amrit and Christopher shared with us:

Can you give us an introduction to the topic of GST and insolvency and the issues arising there?

The issue arises out of, first of all, the current economic climate, where there is some expectation of a higher level of activity in the insolvency space. So, that then puts into focus how the GST scheme works.

The scheme obviously affects a number of parties, including the insolvent entity, the representative liquidator or otherwise, the tax office and all the other creditors. Each will have different issues and questions, and it's really a question of working through the requirements of each of those stakeholders under the GST scheme, as we know it.

One issue that is of particular interest is whether the provisions of the GST legislation as they're drafted create some kind of priority of preference in favor of the Tax Office. If that is the case, then that is a major change to the scheme of an insolvency, where normally the Tax Office is an unsecured creditor along with all the others.

I think on a conventional view that will not be the outcome, but because of the drafting, it does raise a question. It would be certainly interesting to hear the views of various stakeholders, including the Tax Office on how that might work - or not work, as the case may be.

What we can expect to learn during your session, GST and Insolvency? 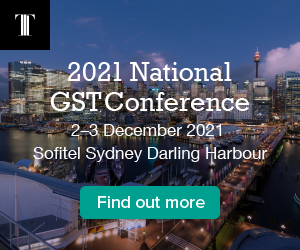 From my point of view, I'll be talking through an overview of what a Director of a company needs to be aware of when a company faces insolvency, especially in the context of a company's tax liabilities.

We’ll be looking at it in terms of pre-winding up, what pitfalls or things Directors need to be aware of, as well as post-winding up, when a liquidator has been appointed, being aware of what sort of things can still happen to a Director in that scenario as well.

I’ll also be talking about the ATO’s current approach to debt recovery, or recovering on tax liabilities. The ATO does recognize that the community has experienced significant challenges in the past two years and [I’ll cover] how it has adapted its approach to accommodate the wide variety of experience that has come about through the challenges taxpayers face.

What piqued your interest to delve into the topic of GST and insolvency?

It's always raised theoretical questions and questions of legal interpretation that don't normally arise and that is simply a product of the fact that the scheme fixes on a party other than the taxpayer, the liability for GST.

So normally it's a company that pays the GST for which it is liable, but in the context of an insolvency, that liability gets shifted onto somebody else, namely the liquidator, administrative receiver, etc.

It's that disconnect between who is really the taxpayer and who actually bears the cost that raises a whole raft of questions. And that’s independent of the question Chris raised about whether the Directors can carry liability.

So in other words, there are at least three possible places where a tax liability can fall for more or less the same transaction. And that is what makes the area different to most other areas.

Why do you think this topic is so relevant for practitioners right now?

I think the biggest impact is making people aware that although they may see one particular side of the ATO - in terms of the ATO taking money from people in businesses, which is not always welcome - there's a wider context to it. There is a wider dimension to it, there's a lot of nuance to it.

Taxes are ultimately used as a basis to support the actions of the government and the activities and programs that they have in place. So, there's a wider context and the way that filters through to the particular work that's being done and the way things are done is one of the things I want to get across to the audience on the day.

What are you looking forward to about the 2021 National GST Conference?

I think it will be a great opportunity to meet peers as well as experts in the field.

I think it's also a very good opportunity for practitioners to hear directly from the ATO their views on things and that’s a particularly valuable aspect of the event.

Catch Amrit and Christopher at the 2021 National GST Conference from 2 - 3 December, 2021 at the Sofitel Sydney, Darling Harbour, or online. Find out more.

Christopher Lee is an Acting Principal Lawyer in the Review and Dispute Resolution (RDR) business line at the ATO. RDR manages tax disputes with a focus on resolving disputes early, avoiding litigation where possible and understanding the drivers of disputes so disputes can be prevented or resolved earlier at the ATO. Chris manages a litigation team providing advice and dispute resolution services on a range of highly complex debt recovery, administrative and tax technical law matters. Chris has over 15 years’ experience at the ATO and in that time has worked in litigation, objections, general law and freedom of information.