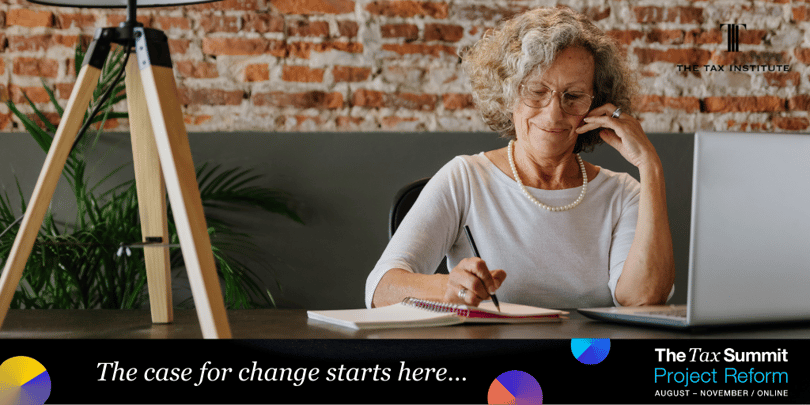 “Tax reform is not any old change that you come up with and it’s not tax cutting, either. There are people who like to say that tax reform means less tax, but that’s ideology, that’s not tax reform.”

In our final lead in Keynote session of The Tax Summit: Project Reform, futurist, analyst, advisor, commentator and author, Bernard Salt AM, gave a highly engaging analysis of Australia’s demographic data, before, during and after the COVID-19 pandemic.

Drawing on a wealth of data analysis, Bernard outlined the effect of the pandemic on numerous facets of Australian life, including our workforce, immigration, the layout of our cities and homes and our trust in big government.

We’re sharing some key insights from his session, around the timing of tax reform and the impact of the huge number of baby boomers set to retire this decade, below.

Need to catch up on the path to tax reform so far?

Register for a Full Access Virtual Pass to The Tax Summit: Project Reform, to watch all past sessions from the event lineup.

Your Virtual Pass also allows you to tune into the Virtual Summit event on 24–25 November, streamed live from the MCA, Sydney.

Bernard explained his analysis of electoral commission data dating back as far as Federation, showing the number of Australian’s voting for non-major parties – what he deemed a “protest vote”. A higher number of these “protest votes” suggests dissatisfaction with major political parties, current government and big business. The data, he said, showed that faith in major institutions tends to rise in the aftermath of crises such as WW1 or the Great Depression.

“In the post-pandemic era, I think that what you could see is a restoration of faith and trust. It seems counterintuitive to say it, but between 1943 and 1946, the relief of victory, of having got through it, you almost see that joie de vivre … in those numbers, in that post-war period,” he said.

“I suspect, that the mid-to-late 2020s will be an era of strengthening faith and trust in the big institutions of Australia.”

And if Bernard’s extrapolation of the data proves correct, this period of restored faith and trust could prove fertile ground for tax reform.

The need for meaningful change as baby boomers retire

The opportunity for meaningful change to our tax system may come not a moment too soon. Bernard identified two other trends that may place strain on our tax and transfer systems in the future: approximately 5 million baby boomers transitioning to retirement and a greater emphasis on the digital knowledge economy.

Bernard’s data showed that while industries such as hospitality and travel are on the decline amidst COVID-19, others like logistics and technology have actually grown. This shows a trend towards a more digital, knowledge-based economy, which could cause a shift in our workforce and our support for those left out.

“From a taxation point of view, there is the requirement for support for those that struggle to find a commercial opportunity or employment in the highly digital economy, knowledge work economy that lies ahead,” he said.
Perhaps the bigger issue is the “sheer volume of baby boomers pushing into retirement.”

The number of people entering the workforce at 15 years of age is far outstripped by those exiting and entering retirement at 65 years old. This puts pressure on the income tax generated by fewer workers, to cover the old age pension and other benefits for approximately 5 million retirees.

In order to manage that, we need more productivity per worker. This could partly be addressed by pivoting to automation, mechanization and artificial intelligence to work more efficiently – but that alone may not be enough.
“We probably also need more taxation per worker, when you think about it. So [when we have] a bucket load more baby boomers and relatively fewer people pushing into the working age population, we need more productivity in terms of output and more productivity in terms of tax. Or we need to import more workers, or we need to ask the baby boomers to moderate their spending expectations. Or all of the above, and it still ain’t gonna be enough,” Bernard said. The 5 million baby boomers moving into retirement – set to peak around 2026–27 – are replacing a pool of approximately 2.5 million retirees.

“So almost doubling the level of retirees. We ain’t doubling the number of workers. We can improve their productivity and we can tinker with the tax rates here and there, but these numbers are significantly out of whack,” he said.

“And if you then add onto that issues around large sectors of the workforce unable to get into meaningful or secure work, this really does set up a situation of great challenges for social cohesion going forward.”
All this means that over the next six or seven years, tax reform may become an increasingly pressing issue for Australian society.

But despite any further challenges the 2020s may bring, and the challenges posed by proposing tax changes, Bernard ended on a positive note.

“...look generally, you would have to say that where else on the planet would you rather be facing and managing these issues than in Australia? … Even if there are challenges in the future, I wouldn’t want to be anywhere else facing those challenges.”

Wondering what’s next on the path to tax reform? Check out our Quick guide to The Tax Summit: Project Reform Virtual Summit event

Head to our member forum, Community, to continue the conversation on Bernard Salt’s expert insights into the state of our tax system today.