Tax Partner on how to beat disruption in tax

Partner at Arnold Bloch Liebler, Clint Harding, CTA, shares his tips on how to manage disruption and automation in tax.

Clint practises at Arnold Bloch Leibler’s taxation department with a focus on corporate and international tax, financial instruments and transactions, and tax audits and disputes with the ATO.

We caught up with him at the 34th National Convention in Hobart.

“I'm a year older, a year wiser, a year less hair than I had last year,” he laughs.

“But I think the most meaningful thing that's come out of winning the award for me is really the people I meet along the journey, the other finalists, and the other smart, clever people who were involved in the process.

“It’s also been so rewarding to continue building those networks as well as the opportunities that came through the awards process.”

Future of tax and education

Clint says disruption and change in tax are tricky because you may receive many different responses from various tax professionals.

“To me, it's about being curious and continuing to learn,” he says.

“It’s about understanding, talking to your peers, and seeing what other people are doing in that space.

“I'm an internal optimist, so I think disruption and automation is a great thing.”

Clint believes tax will become more and more complex and will provide tax professionals with the drive to continue being at the top of their game, technically and professionally.

“There will be a demand for good tax advisers that take very complex technical subject matter and explain that to clients,” he says.

“This will require continued work with bodies like The Tax Institute that allow the tools to do that via education and CPD events.”

Education:  Stand out as the recognised tax expert. Cut through the competition with the prestigious Chartered Tax Adviser (CTA) designation, the highest standard for Tax Advisers. Enrol before 27 September to save $100, and for your last chance to upskill in 2019.

Clint is also a Chartered Tax Adviser and says it is recognised amongst the profession and his client base.

“Within the tax circle and the tax family, the designation of CTA carries with it opportunities to seek out other like-minded people,” he says.

“The designation just sets you apart as someone a bit more senior, who can come at things with more experience.”

Membership evolves with you

Clint says his relationship with The Tax Institute has evolved as he’s evolved as a practitioner.

“It’s been 13-14 years now, and the access to like-minded professionals has been really important,” he admits.

“Especially coming from a different jurisdiction, to be able to access a room full of people, and like-minded tax nerds like myself has been great.

“The work of the technical committees, in particular, allows you to feel like you're actively participating in tax policy, able to have a platform to voice ideas, and try and move the tax system ahead as a whole.” 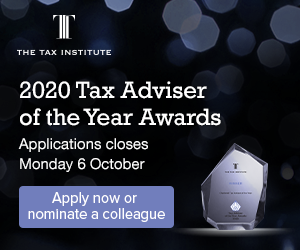 Clint says that's important work, and it’s really helped with his career, in terms of building a network and his profile.

Advice: “get amongst it”

“My advice for new practitioners in tax is to get amongst it,” he says.

“As everyone progresses with their career, those people progress with you; that certainly was the case for me.”

Clint says he has formed a very close bond with people he got to know early in his career via The Tax Institute. He says tax has its own little family.

“So my advice to young practitioners is get involved and don't be afraid to ask for help.”

The Chartered Tax Adviser (CTA) designation is the premier standard of excellence in tax. That’s why it is widely recognised as the world’s premier tax credential.  Learn the advanced knowledge required to add real value to your clients and support colleagues on challenging tax issues. Join the growing ranks of CTAs at the forefront of the profession. Find out how.