There were many changes of significance, including that, unlike the law it replaced (Div 13 of the Income Tax Assessment Act 1936 (Cth) (ITAA36)), Subdiv 815-B is self-executing.

In his article in Taxation in Australia, “Practical” safe harbours and Australia’s transfer pricing rules, excerpted in this post, Michael Jenkins, CTA, looks at some of the issues facing businesses and their advisers.

Internationally, there is growing acceptance of the usefulness of safe harbours in transfer pricing for smaller and less complex international related party dealings (IRPDs). For these categories of IRPDs, safe harbours can be effective as a mechanism for improving certainty and reducing costs of compliance.

As Subdiv 815-B is self-executing, the ATO is not able to specify binding safe harbours (they would require an Act of parliament). However, the Commissioner of Taxation has certain powers under the “general power of administration” (GPA) which currently are being used actively in transfer pricing administration.

The major example is the increased use of practical compliance guidelines (PCGs) to implement non-binding practical or “administrative” safe harbours. Of note are the nature of the issues and arrangements where the ATO is active in the development of these PCGs. They are being designed to apply in complex areas of transfer pricing.

In this article, issues associated with the background to PCGs are discussed. The focus is on three major transfer pricing PCGs released since 2017. At one level, efforts on the part of the ATO to provide information to the market as to their views on compliance issues are to be supported. The information therein means Australian taxpayers have an improved understanding of the areas that need to be addressed as part of their economic analyses underpinning their transfer pricing filing position.

However, the complexity and diversity of the arrangements in scope raise questions regarding the extent to which generalised qualitative and quantitative analysis of the type underpinning the ATO’s risk zones can be made applicable. Of critical importance also is the way that the PCGs are used by the ATO. Their legal status does not go beyond that of a statement of the ATO’s view of risk, so it is important that indicators of risk do not become linked to arm’s length outcomes.

In a general sense, the formal requirements under Subdiv 815-B are clear. Taxpayers are required to self-assess their tax position with reference to the underlying statutory test, and file returns on the basis they consider as compliant — specifically, “arm’s length conditions” must exist to ensure that the Australian entity does not get a “transfer pricing benefit”.

The ATO’s role is to administer the provisions of the tax Acts, ie enforce the rules, but not make the rules. The reality is, of course, more complicated. Notions of the rule of law introduce additional considerations for the regulator. The ATO describes its approach to law interpretation as purposive, which, among other things, means that the ATO is to apply the GPA to interpret and apply the law in a way that makes the system work.2 In addition, the ATO has the power to issue interpretative products (rulings) that are binding on the Commissioner. 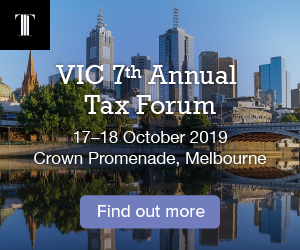 Michael's article goes on to look at safe harbours in transfer pricing, the general power of administration, and practical compliance guidelines.

It also looks at the transfer pricing PCGs, and PCGs as “soft law”.

Michael Jenkins, CTA, is an Associate Partner at EY, where he joined their transfer pricing practice in November 2018.

His article is available for members to read here in the May 2019 issue of Taxation in Australia.


Immediately prior to joining EY, Michael was an Assistant Commissioner in the ATO, holding the position of the ATO’s Chief Economist and leader of the ATO’s APA/MAP unit, responsible for Australia’s Competent Authority program.

Members can access their Taxation in Australia journal online, anywhere, anytime, in an all-new digital format.

In line with how you work in this digital world, you can now access the journal wherever you are, with a host of new added features and functionality.


Read the full article now by accessing your digital issue of Taxation in Australia.