Financial crime, including tax evasion, has long been a problem faced by governments and regulators around the world.

Rapid developments in electronic trading and the globalisation of business generally have inevitably brought with them increased opportunities for criminal financial activity.
In an article in the February 2018 issue of The Tax Specialist, Allastair McGillivray, CTA, (Director, Australia Tax, Royal Bank of Canada) looks at the issues and calls for governments worldwide to collaborate, along with regulatory bodies and police forces.
His article, excerpted  this post, looks at the development of financial crime and draws on examples including the Panama Papers of 2015 and the Paradise Papers of 2017, to show how active collaboration on a worldwide scale is helping to bring financial criminals to justice and protect global tax revenues. 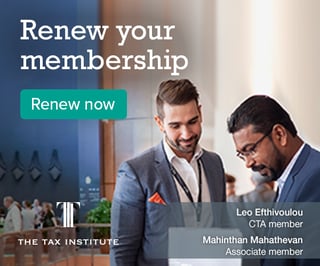 The very jurisdictional nature of taxation sits somewhat uneasily alongside the increasingly global nature of both business and criminal activities where transactions occur almost invisibly, across multiple borders at breakneck speed.

In the same way that police and other security forces worldwide have found it necessary to become more sophisticated in their methods of tackling crime, regulators such as the Australian Taxation Office (ATO) are also finding it necessary to revitalise their approaches to tackling tax evasion and other financial crimes.

The enforcement of tax obligations is a fundamental tenet of economic prosperity and social justice. Moreover, the increasing globalisation of trade and free movement of capital and labour has also been accompanied by greater opportunities for tax evasion and other cross-border crimes, such as money laundering.

Tax regulators are no longer simply bound by the sovereignty of their own particular jurisdiction, but have to reach out to their counterparts and others around the world to provide a united response to fiscal criminal activity. It will be proposed that global cooperation is vitally important if countries are to effectively protect their tax revenues and bring tax evaders to account.

By using examples of collaboration between a multitude of organisations and observing the resulting financial and judicial outcomes, this article will assess the importance of global cooperation in the effective protection of tax revenue and prosecution of tax evasion.

In both cases, many millions of potentially incriminating tax-sensitive documents were leaked to two journalists, Bastian Obermayer and his colleague Frederik Obermaier, who both worked with the German newspaper Suddeutsche Zeitung. The Panama data leak was the largest in history, comprising 13.4 million files containing 2.6 terabytes of data relating to over 200,000 offshore entities.

Paradise was a smaller leak, a mere 1.4 terabytes of data, making it the second biggest leak in history. The files were released to the world’s media in stages and also to tax authorities around the world, which naturally took a great interest in the contents. To this day, investigations by regulators including the ATO are continuing, with the promise of prosecutions and recovery of tax in many cases.

Panama and Paradise have shown that, aside from the collaboration between governments and regulators, the sharing of information between journalists through their worldwide networks is of great significance and it is a continuing and growing trend. Investigative journalists want whistleblowers to approach them with controversial information and stories.

However, in the wake of high-profile whistleblowing cases, including Julian Assange, Edward Snowden and Chelsea (Bradley) Manning, it was felt that whistleblowers would be somewhat reluctant to reveal themselves. Many journalists and newspapers have started to offer a secure way of receiving and disseminating potentially sensitive data that they received from anonymous whistleblowers.

This editorial collaboration arguably increased the impact of the story when it was simultaneously released around the world in a well-coordinated manner.

There is an ethical dilemma here. The veil of secrecy that tax havens provide can be extremely convenient whether or not you are engaging in illegal activities within their shores. Individuals and companies are reasonably entitled to privacy in their financial affairs, although there is a convincing argument that illegality should negate such entitlement.

Where global cooperation includes the sharing of “leaked” information received from anonymous sources and a portion of this information relates to legal activities, it could be asked, “are the many whose financial privacy has been invaded merely collateral damage in an attempt to hit a single target?”.

The leaking of millions of files of data does not necessarily discriminate between the criminal and the merely fiscally perspicacious, but it should be borne in mind that: “The leaking of confidential information damages lives and reputations, irrespective of the circumstances”.

While tax havens retain their veil of secrecy, it seems likely that tax authorities will have to keep relying, at least in part, on receiving sensitive and possibly incriminating tax information from whistleblowers, as well as more established global agency partners. It is perhaps ironic that the jurisdictional arbitrage engaged in by some journalists is a similar technique used by “transnational criminals such as terrorists, money launderers … to hinder attempts at governmental prosecution”.

Fighting fire with fire may be an appropriate turn of phrase.

It has been shown that there is increasing collaboration and cooperation between jurisdictions on many levels, and across multiple organisations and official departments, both in the public domain and via private alliances. The work of the G20, the OECD and many individual tax regulators around the world sends a clear signal that tax evasion and money laundering is unacceptable on any level and will be attacked with vigour.

There is consensus that working together rather than alone is the preferred modus operandi in today’s global financial theatre. It has been shown that collaboration is invariably beneficial, and that the sharing of information can, in many cases, greatly assist tax authorities and crime enforcement agencies to piece together vital intelligence around criminal behaviour.

The role played by tax havens is significant, but the secrecy they can afford to tax evaders, as well as those engaged in legitimate tax planning, is often a major stumbling block to the successful pursuit of criminals. The action of whistleblowers who leak confidential information can greatly assist tax authorities, but ethical questions remain, especially where confidential information becomes public in instances where no illegality has taken place, but great embarrassment has been brought on individuals or corporations whose private financial arrangements have been laid bare for all to see.

The real targets must be those who break the law, and to this end, “co-ordinated global efforts are required to … stop the middlemen who make it so easy for crooks to launder their loot”.