Keeping on top of the ever-raising tax law ‘bar’ 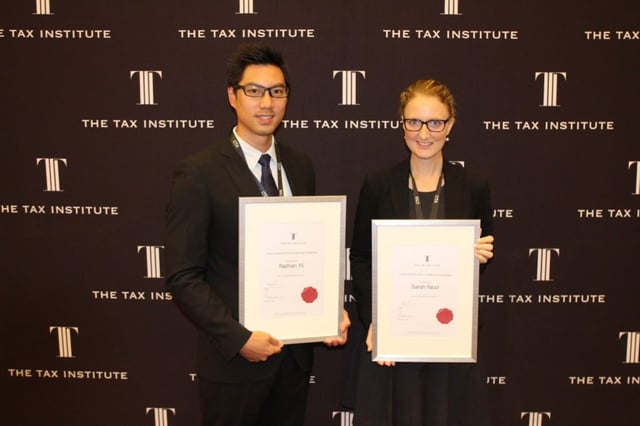 Tax law is a field with constantly changing laws, rules and regulations. Ongoing education is not just nice to have, it is essential.

Here we talk to two high-achievers who topped their respective years in the exam to become a Chartered Tax Adviser (CTA). They discuss their experience and achievements and explain why The Tax Institute’s education program is so important in their line of work.

Sarah Nicol is a senior consultant and CTA in corporate tax at KPMG in Brisbane and also holds a practicing certificate. Nathan Yii is principal lawyer, SMSF Specialist AdvisorTM and CTA at Nathan Yii Lawyers in Melbourne. Sarah was dux study period 3 in 2016 and Nathan dux study period 2 in 2017 when they completed the CTA3 Advisory exam and achieved the CTA post-nominals.

Nathan Yii began his legal career as a trainee and junior solicitor in the areas of estate planning, structuring and superannuation. “Ever since uni days, I have always been interested in tax and this was what the law firm I was working at had on offer,” he says.

“After being given many options including continuing as a solicitor, pursuing further postgraduate study, going to the bar and even becoming an academic, I had to weigh up what I wanted in my career. I decided that I wanted to be known for my legal skills in private wealth management,” says Nathan.

When Sarah Nicol was completing a Law Commerce dual degree at university she said she started looking for career opportunities that would provide a good crossover of her qualifications. “As all students do, when you're drawing close to the end of your degree, you start looking for career avenues,” she says.

“What really appealed to me was the variety of the work, the highly technical nature and being at the front end of business decision-making, transactions and structuring.” Sarah Nicol

“I actually met a Tax Partner at a law school networking event and hearing about their experience of working in tax appealed to me. The variety of the work and highly technical nature, being at the front end of business decision-making, transactions and structuring,” she says. Sarah applied for a graduate position with KPMG, “and here I am a little over four years later”.

Why they enrolled to become a CTA

Sarah says that she feels completing the CTA program and becoming a CTA is somewhat of a “rite of passage” in KPMG. “It is strongly encouraged by KPMG and it's a challenge that I welcomed after completing the CTA2 Advanced subjects. It's the natural next step in terms of continued professional development,” she adds.

Nathan was encouraged by The Tax Institute to become a CTA to enhance his career as a legal practitioner. “At first, I declined as I was already committed to postgraduate study and didn’t want to juggle too much. I said that I would consider it down the track as I was interested in becoming part of The Tax Institute, which has a lot of influence in shaping the Australian tax system”, he says.

“After taking a few years break from study once I finished my Masters of Law in 2014, I enrolled in the CTA3 Advisory subject in 2017 to gain recognition as a tax practitioner amongst my peers,” says Nathan.

Education: Developed and delivered by industry experts, our programs help you achieve your full potential in your career, your workplace, and in the profession. Study period 2 is now open.

The best part of CTA3 Advisory?

Nathan says being a detailed person, he really values the technical detail of rules: “Delving into the detail of tax legislation and tax research in the CTA3 Advisory subject is a necessary skill in the tax arena. I valued becoming more acquainted with the technicality of tax legislation and being able to critically analyse tax law in its application to real-life scenarios.”

Sarah says she found the subject: “very practical and streamlined. It was conducted over a reasonable amount of time and the structure of the assessment and questions were very well thought out – the subject requires a deep dive into the tax technical and it was very realistic in terms of structure.”

“Participants are required to prepare advice based on a set of facts provided. Then in the exam, we are presented with three late-breaking facts which impact our original advice and have three hours to write subsequent advice addressing the tax consequences triggered by the late-breaking facts. I thought it was practical and not dissimilar to what I deal with daily in my role at KPMG,” she adds.

How CTA post-nominals have advanced their careers

Nathan believes that the CTA post nominals have placed him at an advantage over his lawyer peers. He says tax planning is one key factor in succession planning and structuring matters: “Private wealth advisers such as accountants and financial planners often ask me to provide tax advice to their clients rather than just draft legal documents. Having the Chartered Tax Adviser designation has marketed me as not just a lawyer, but a lawyer who can navigate the tax system.

“I believe tax practitioners – both accountants and lawyers – would benefit having the CTA post-nominals after their name as The Tax Institute is the leading tax-practitioner group in Australia. For those involved in cross-jurisdictional and cross-border matters, the CTA designation is recognised in other countries,” says Nathan. 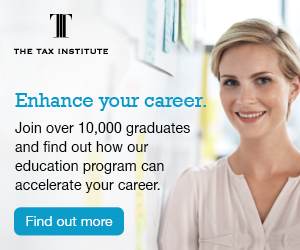 Sarah feels in terms of advancing her career, there's a level of recognition and respect that comes from being titled a CTA: “Both within my firm and within the market. In addition to that, access to the materials and the training provided by The Tax Institute is a great resource. So, once you become a CTA and obtain a membership with The Tax Institute, you gain access to a large array of resources.

Praise for the practical outcomes of the course

Sarah says it was all about providing a client with advice: “It incorporated the technical substance and turnaround that we face day-to-day as practitioners. The exam was limited to three hours but there was enough guidance given for adequate preparation to be done.

“It was a really good combination of having those couple of weeks to digest the scenario presented, do a deep dive into the tax technical and produce a detailed initial advice, and then operating under time pressure to turn around a subsequent advice to address the tax consequences arising from late-breaking facts in a short space of time.”

“It's such a great opportunity to have tax education available to develop performance at various levels. You start at CTA1 Foundations and as you progress you gain more knowledge and have more practical experience behind you and move on to CTA2A and CTA2B Advanced; and after a couple of years you become eligible to enrol into CTA3 Advisory,” she says. With a tiered structure of learning and outcomes, the Chartered Tax Adviser Program can help you launch your career, or cement your role.

“I find sometimes as tax practitioners, we get bogged down in all the detail of the legislation, but the key thing to success is being able to appropriately and effectively communicate to clients and other non-tax practitioners.” Nathan Yii.

Nathan says when he studied CTA3 Advisory it was largely case-study based: “This taught us not just to know what the tax law says, but trained us to apply the tax legislation to real-life scenarios as we would be expected to in a work setting.

“Also, preparing for the exam involved honing in on an area and writing a comprehensive letter of advice to a client. I find sometimes as tax practitioners, we get bogged down in all the detail of the legislation (which can be a good thing), but the key thing to success is being able to appropriately and effectively communicate to clients and other non-tax practitioners.

“As often the case in a work setting, clients provide us with further information which may change the advice we initially gave and we are required to quickly reassess the taxpayer’s position and communicate this in a timely manner. The late-breaking facts we are given in the exam really trained us to think on our feet and focused on effective written communication to a client,” says Nathan.

CTA3 Advisory relies on you as a sophisticated learner and provides you with opportunities to exercise your judgement and problem-solving skills whilst stimulating your learning through reflection - and ultimately leads to the sought-after global CTA designation.