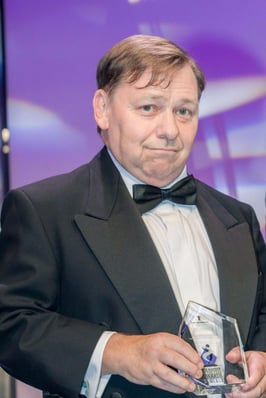 Michael Barbour is General Manager Group Taxation at Westpac. He is The Tax Institute's 2017 Corporate Tax Adviser of the Year.

We asked Michael about his career and life.

What initially led you to a career in tax?

My first job, from high school, was with the Australian Taxation Office. I was there for around 11 years, and it was a brilliant grounding for my subsequent career. I worked in the areas of debt recovery, assessing and appeals, as well as some policy and legislation work in Canberra.

I completed my tertiary education while working with the ATO.

From the ATO, I went to Touche Ross and Capita Finance, and joined Westpac in 1998. I’ve headed the group taxation function at Westpac since 2001.

How has Westpac changed over your time there?

When I first began at Westpac, a new CEO, Bob Joss, was reinvigorating the bank by changing the culture and helping the organisation to focus more on customer service. Westpac had also acquired a number of smaller banks.

David Morgan then became CEO and continued that strategy while divesting AGC, the consumer finance business, and boosting the wealth management arm with the acquisition of BT.

Later, in 2008, we merged with St.George Bank. So it has been a busy period over the past two decades.

How has the field of corporate tax changed?

Corporate tax has changed in terms of the breadth of the legislation that applies to companies like Westpac. Legislative changes are almost constant.

It has also changed in terms of how central tax offices, both here and in other countries, have managed their relationships. It’s fair to say that, in the 1990s and early 2000s, the relationship between corporations and the ATO was a bit frosty. This was the era of large case audits, which created some anxiety between the ATO and major companies.

We then entered a period in which our relationship with the ATO became more stable and more transparent. So the relationship is good at the moment.

What do you enjoy most about your work?

I enjoy the complexity, and the fact that we can achieve tangible outcomes and get things done. In my role, while tax decisions are based on risk profiles agreed with senior management and the board, I’m effectively the ultimate decision-maker in terms of Westpac’s tax position.

Also, the interactions we have, not only with the ATO, but with the government, Treasury and the OECD, give the work a rich, broad context.

What are the biggest challenges in your work?

The biggest challenges have involved the acquisitions and divestments that Westpac has made over the years. They have thrown up many different tax issues. OECD changes around base erosion and profit shifting have been challenging, as have the government’s changes in terms of the taxation treatment of multinational corporations.

What have been your biggest career achievements?

My biggest achievement is building an effective tax team at Westpac. The team has been stable for a few years, and each member is an accomplished tax practitioner.

Another achievement is building productive relationships with the ATO, Treasury and other government entities.

What did it mean to you to win the Corporate Tax Adviser of the Year award?

I see it as a very pleasing recognition of the Westpac tax group’s achievements over the years. It’s really an acknowledgment of the group’s collective effort.

Do you have any advice for entry-level tax practitioners?

My main advice is to understand the commercial nature of the transactional issues that a tax practitioner addresses.

Once you understand what’s really happening and how things work, in a business sense, it’s much easier to apply the tax rules and to communicate effectively with relevant stakeholders.

Outside of tax, what do you enjoy doing?

I enjoy reading and swimming, but my main pastime is my family. I have a wife and four children, and enjoy spending time with them. The children are all reasonably young, so they keep me busy.