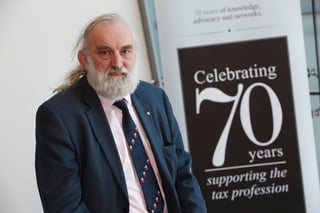 How long have you been a member?

What years were you president?

What were some of the highlights of your time as President?

The Millennium bug proving to be a damp squib!

Reporting a profit of nearly $525,000 from gross income of about $5m. I wish I could claim credit for it, but it was due to the introduction of GST and the two tranches of reforms announced by the Government in response to the Ralph Review which fuelled an unprecedented demand for CPE.

Like all Presidents, attending the National and State Conventions which provided the opportunity to meet a cross section of members.

There were two particularly memorable events, both of which took place in Tasmania.

At the National Convention the theme was the Tax Wilderness and the opening took place in a suitably decorated old Hobart Town Hall. It had been intended that I would arrive at the stage by flying fox from the gallery at the back of the hall. Unfortunately the drop was too shallow and so I was told that I would abseil from the walkway under the roof down to the stage. My acrophobia was brushed aside. I did as I was told. Then I introduced our opening speaker the then Commissioner of Taxation, Michael Carmody. He began by saying that he had not expected me to enter though a tax loophole and during the course of his speech pointed out some of the absurdities of exempting food from the proposed GST. A brave call which unfortunately was ignored.

At the State Convention in Swansea I became part of the after dinner entertainment when the drag artist dressed as Queen Elizabeth called me onto the stage and after much humour at my expense, knighted me. When my term as President ended I was presented with a montage of photographs of the occasion.

How did The Tax Institute help to shape the industry and the profession during that time?

We took the first steps towards introducing structured education. This included forming an examinations committee chaired by the late Graham Hill with Professor Graeme Cooper, Professor Glen Barton and immediate past President Ken Spence as members. Last year this initial step resulted in us being licensed by the Chartered Institute of Taxation to use the CTA designation.

We were involved in the revived consultation on a new regime for Tax Agents. However as this was a process that we began in 1992 and ultimately led to the Tax Agent Services Act 2009 this was but one year on a seventeen year journey.

In December 1998 the A New Tax System (Goods and Services Tax) Bill 1998 was introduced and passed in June 1999. I wonder when it will be renamed The Not So New GST Act? There was no consultation prior to its introduction. It appeared to embrace many of the worst features of existing GST and VAT regimes in other countries and added some unique Australian horrors. Over 1,000 amendments were made. The Institute was acknowledged in Parliament as having been a significant contributor to the changes.

The Ralph Review of Business Tax released its report, A Tax System Redesigned. The Tax Institute had been represented at 98% of the focus group meetings and Ken Spence and I participated in confidential consultations with key members of the Review team.

I recall giving a number of papers on two of the Ralph Review recommendations. These were the Entity Tax Regime and Option 2, the cash flow or tax value method. Neither of these proposals were adopted. Given the on-going issues with the taxation of trusts perhaps it is a pity that the Entity Tax proposal did not go ahead. With the benefit of hindsight it was the profits first rule with which it was coupled that was the cause of much of the negative reaction.

One change which flowed from the Ralph Review was the introduction of a more formal system of consultation on legislative changes. Something which now is taken for granted.

Other tax changes flowing from the Ralph Review were the Alienation of Personal Services Income regime, the non-commercial loss provisions, the CGT discount, the CGT small business concessions and deductions for black hole expenditure. We were active in the consultations on these and other measures.

The proposal to tax fringe benefits to employees under the PAYE system received short shrift from the Government. A response that has been repeated since by Government.

Interestingly there was a recommendation that for Part IVA the counterfactual should reflect the commercial substance of the arrangement. A concept that now finds form in the Tax Laws Amendment (Countering Tax Avoidance and Multinational Profit Shifting) Bill 2013.

Despite these actual and rejected significant tax reforms, the hot topic during my year as President was Ultimate Beneficiary Statements. These were imposed under a draconian series of provisions.  Following submissions from the Institute the regime was relaxed. Anecdotally the statements ended up in storage in Albury and never were looked at by the ATO.

The introduction of the CTA, and the structured education on which it is based, means that we can become recognised as a genuine profession.

One of the joys of the Institute has been the collegiality, the friendships made and the willingness of members to put in so much through the preparation and presentation of papers. Whilst it may have been necessary for the Institute to become more commercial in its approach I hope it never loses sight of the fact, and importance, of it being a member organisation.