The Case for Change: President’s Introduction 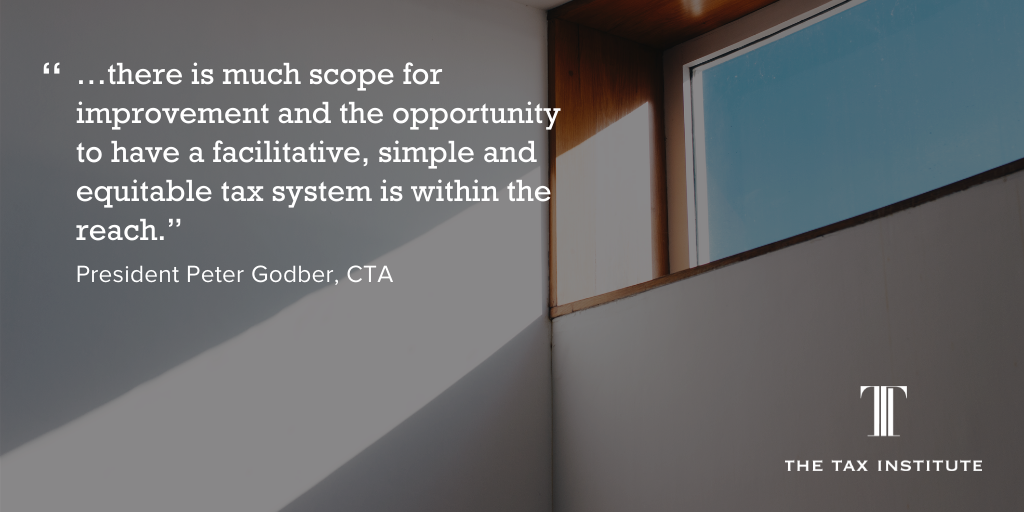 The Tax Institute has launched our ground-breaking paper, The Case for Change. The completion of this report is a major milestone in our work towards a fairer, simpler and more efficient tax system. President Peter Godber introduces the paper below.

Welcome to the Case for Change. This document represents the culmination of over a year’s work involving hundreds of people, each of whom has been passionate about fixing all or some part of the tax system.

What I am sure each contributor has also had in common is a belief that a good tax system is fundamental to the success of our economy and our future. As Oliver Wendell Holmes, former Justice of the United States Supreme Court, said, “Taxes are what we pay for a civilized society”. To be a great society, we must have a number of fundamental building blocks, providing the environment where businesses and employment can flourish and not be weighed down by an inefficient and moribund tax system.

What has also been common among participants and contributors to this Case for Change is the view that our current tax system is so much less than it could be and that there is much scope for improvement. The opportunity to have a facilitative, simple and equitable tax system is within reach should our politicians be prepared to grasp the opportunity.

When The Tax Institute embarked on this process, it was not apparent how broad and wide our engagement would become. We started by engaging with our volunteers on our various state and national technical committees, identifying within their areas of expertise what the pressing issues were, and what opportunities for improvement could be seized. That feedback was then put to various commentators and discussants for consideration and building upon, through a series of over 30 events over the course of 2020 as part of The Tax Summit: Project Reform. Through that series, The Tax
Institute hosted focus sessions, seminars, keynotes, roundtable discussions and the Virtual Summit.

We were pleased that so many participants outside our membership base were also willing to contribute. From a former federal treasurer to a current state treasurer, from opposition spokespersons to policy advisers and administrators, from representatives of large business, small business, civil society, think tanks, academia and other professional bodies. A broad cross-section of society was invited and most were willing to participate. In the end, hundreds of people were involved.

It is perhaps that broad level of interest that gives us the greatest hope that policymakers and politicians of all colours will note the groundswell of support for fundamental tax reform. The Case for Change does not represent a blueprint for tax reform. It is, and intends to be, a discussion starter, identifying some of the more important areas of reform of the tax system that should be debated. Not every suggestion that has come forward through the course of the project has been included. Rather, there has been a process of debating internally and distilling those ideas to present them as options that can be weighed, recognising that not all agree on the best option and that, sometimes, reasonable minds can differ. In the end, it is the work of The Tax Institute and does not seek to represent the views of any participant. I would like to thank the many volunteers and other individuals who gave freely of their time and energy to contribute their ideas and views. Without them, this would not have been possible.

We look forward to the next stage of the ongoing debate that we hope will ultimately lead to significant tax reform to power our economy on to support a greater society.