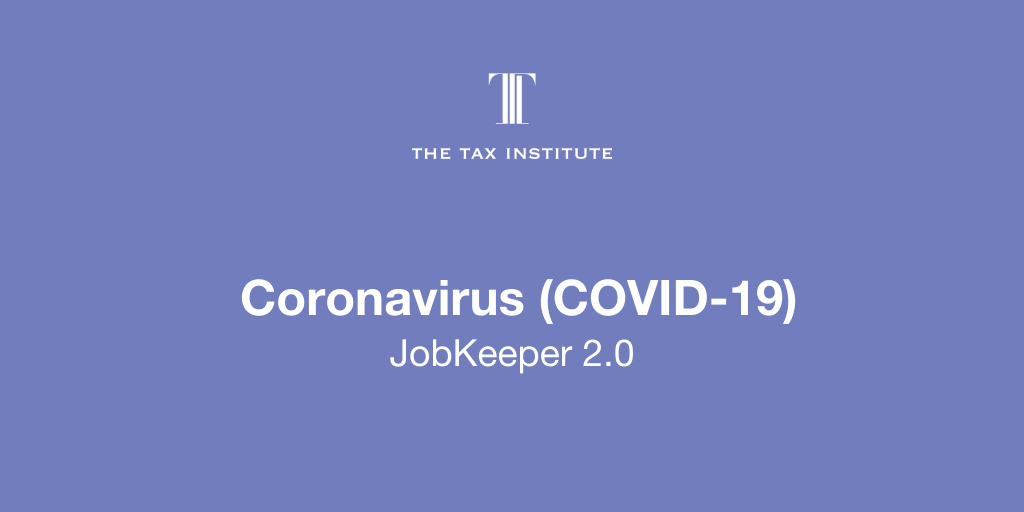 Not unexpectedly, in light of the continuing COVID-19 crisis, the Government has announced it will extend the JobKeeper program by six months to 28 March 2021. This article discusses the extension to JobKeeper and what the redesigned rules mean for employers and employees beyond September.

The Government announced on 21 July 2020 that a modified JobKeeper program will continue for another six months beyond its legislated end date of 27 September 2020 until 28 March 2021. This follows a three-month review of JobKeeper which concluded that the case for extending JobKeeper beyond September is strong. The review suggested that:

No changes will be made to the existing JobKeeper arrangements until 28 September 2020.

A two-tiered system will apply so that employees who worked for 20 hours or more in the four-week period before 1 March 2020 will be entitled to a higher JobKeeper amount (the ‘full rate’) than those employees who worked less than 20 hours on average in February 2020 (the ‘partial rate’). The rate will also taper the assistance to encourage businesses to meet a greater share of their own wages as economic conditions are expected to improve.

Under JobKeeper 2.0, the fortnightly rate will be reduced from $1,500 in two stages:

Businesses and not-for-profits will need to nominate which payment rate they are claiming for each of their eligible employees or eligible business participants. The Commissioner will have a discretion to set out alternative tests where the individual’s working hours were unusual, for example where they were on leave, unemployed for all or part of February or were volunteering to fight the bushfires.

To date, each month in the program has contained only two JobKeeper fortnights. It is timely to point out that three JobKeeper fortnights end in August 2020, and again, in January 2021. While this will mean a higher JobKeeper payment will be received from the ATO (i.e. $4,500 instead of the usual $3,000), it may also necessitate an adjustment to those payrolls that conform to a monthly cycle, depending on whether the employer has chosen to base the monthly payroll on actual JobKeeper entitlements or an average across the JobKeeper period.

Under the new rules, to be eligible for JobKeeper:

In line with the existing discretion, the Commissioner will have discretion to set out alternative tests where the actual GST turnover in 2020 is not comparable with the actual GST turnover for the equivalent quarter in 2019. Businesses will be able to use their reported BAS details to determine their eligibility, and alternative arrangements will be available for entities that are not required to lodge an activity statement.

The design of the rules which proposes to require businesses to demonstrate that their actual GST turnover has declined by the requisite percentage in consecutive quarters does not have regard for those businesses whose situations may have improved slightly in the June 2020 quarter but have deteriorated in the September or December quarters. The Tax Institute, along with the joint professional bodies, will be seeking greater flexibility from the Government on this requirement.

What is not changing?

During the extended period of JobKeeper, it is not expected that there will be any changes to:

The announcement by the Government on 21 July 2020 needs to be reflected in legislative amendments. The current JobKeeper legislation prevents payments being made beyond 31 December 2020 so an amending bill requiring a sitting of Parliament will be necessary, and is likely to be complemented by a legislative instrument issued by the Treasurer which will set out the details of the new rules. Further details will be available once the legislative amendments are released and updated ATO guidance is published.

The Tax Institute welcomes the extension of JobKeeper for another six months through to March 2021. This gradual unwinding of JobKeeper ensures many businesses who need the continuing support are no longer facing a financial cliff at the end of September. However, it is too early to say whether JobKeeper should be further extended beyond March 2021.

The Government estimates that the total cost of the JobKeeper Payment until March 2021 will now be $85.7 billion. JobKeeper 2.0 represents an increase in the cost of the program by $15.7 billion. The revised cost of the program still falls short of the original expected cost of $130 billion by some $44 billion, so perhaps there is still some room on the Government’s credit card for further assistance should the COVID-19 pandemic further prolong economic recovery.

There has been widespread confusion regarding payroll cycles, and this is likely to continue as employers transition into the reduced rate periods in late September 2020 and early January 2021. There will inevitably be questions around the transition dates where employers may be unsure what amounts they should pay when their payroll cycle doesn’t align with the start and end of JobKeeper fortnights.

The table below sets out the minimum amounts that employers need to pay to meet the wage condition, according to whether their payroll cycle is weekly, fortnightly or monthly.

The following issues will require ATO guidance or further clarification through the legislative instruments:

Want this information in an easy infographic form? Find it here.

Further information on JobKeeper 1.0 is available from the ATO website. Or, head to our dedicated COVID-19 economic stimulus hub for more on JobKeeper, the Cash Flow Boost and other important measures.

DISCLAIMER: This summary is for general use only and should not be relied upon or taken to constitute advice. Further, it is based on available information which is subject to change. Correct as of 29 July 2020.